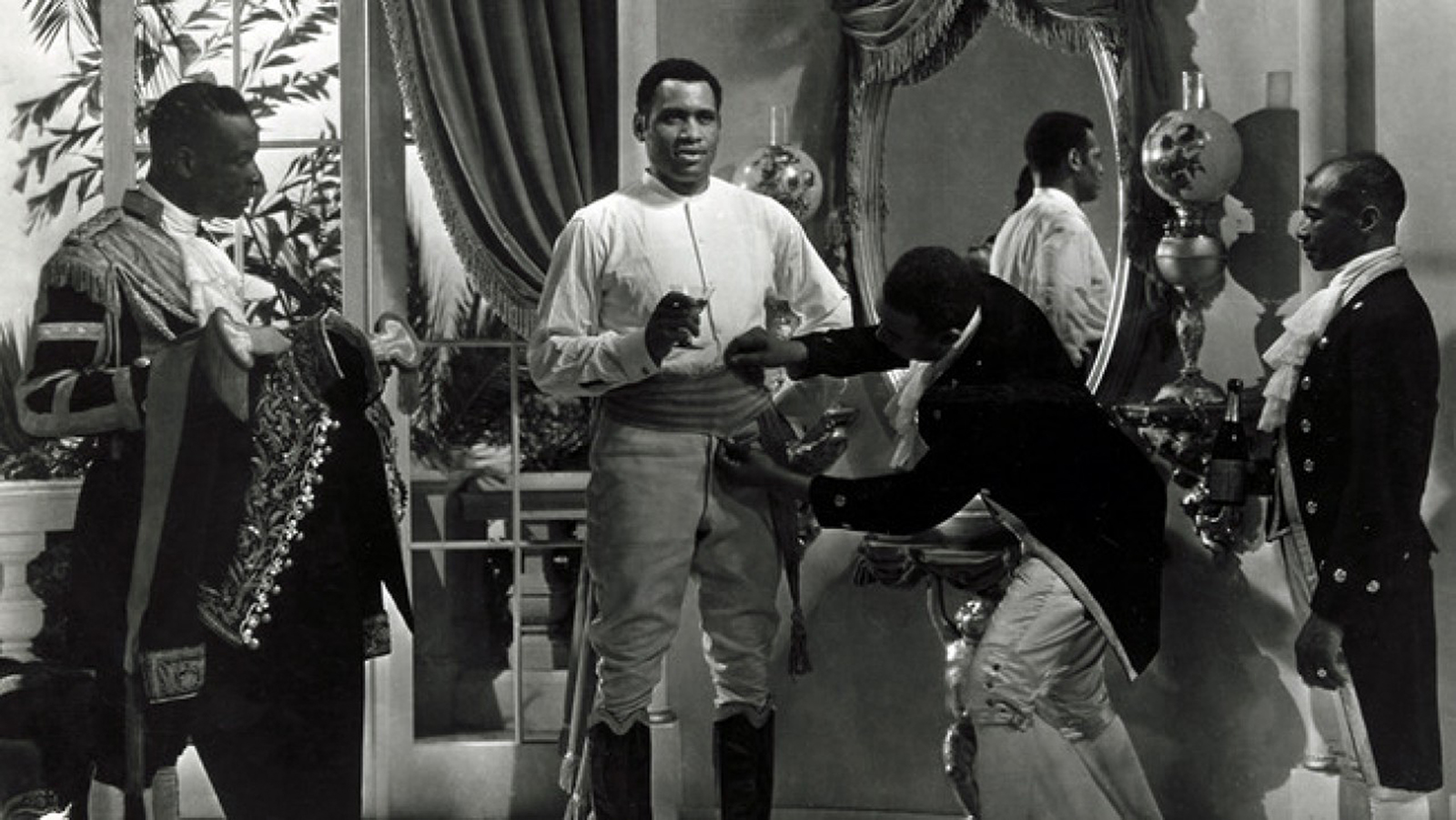 John T. Scott was a leading voice in Xavier University’s Art Department, New Orleans, and in much of the United States for decades before his death in 2007. He so thoroughly explored themes of place, race, and music in his art that he was awarded the John D. and Catherine T. MacArthur Foundation “Genius Grant” in 1992. For me, Paul Robeson, a collagraph Scott created in the early 1970s exemplifies his prowess dealing with the complexities of race in America. Robeson, much like Scott was a cultural giant but his legacy is remembered differently or not at all. Robeson was the preeminent baritone soloist through the Second World War and easily the most famous black man in the world, known as much for his voice as his stage and screen roles.

During the Jim Crow era there was no civil rights advocate with a louder voice than Robeson. However, he regularly faced intense criticism and was attacked for political reasons. Robeson took on acting roles with the intention of highlighting his humanity and self-possession as an artist, hoping he would inspire Africans, American or otherwise, while making a case for their political and social enfranchisement at the same time. On many occasions the editing, shot selection, and racism in general rendered his performances two-dimensional, leaving him and others less than satisfied with his efforts. Robeson was also a vocal supporter of communist and socialist ideals related to race and labor rights. His directly and vociferously stated convictions were less than politically popular during the McCarthy Era. As a matter of fact, he was publicly disavowed by the NAACP, as well as Jackie Robinson because they were cowed by intense political pressure applied by the press and government.

The irony of my brief, rather two-dimensional depiction of Robeson’s career to prove a point is not lost on me, but it is important for understanding Scott’s print by thinking about the negative elements of his critical reception. The print Paul Robeson depicts the man dressed as one of his most famous characters, Brutus Jones from the play and film The Emperor Jones. The juxtaposition of thinking about Robeson and Jones at the same time is a perfect way of understanding the entirely imperfect way activism and history manifest themselves. How could a man whose grave reads, “The artist must elect to fight for freedom or slavery, I have made my choice. I had no alternative,” be involved in a production rife with racial stereotypes and a character whose eventual frailty is unforgiveable? Because it was also a critique of American intervention in Haiti.

There are certainly more pure examples of Robeson’s contributions to society as an artist, but Scott choose not to create a work of art that conjures thoughts of purity or perfection. Instead, the glaring, resolute visage of Robeson with a contorted body entangled in the regalia of an emperor seems at odds with his own body and those who might look at him. The angular, aggressive feeling lines that uncomfortably compress Robeson’s body in space, as well as a splotchy impression caused by uneven plate tone seem to reject the notion of perfection presented in the stark, clean background featuring red, white, and blue stripes. I cannot help but feel as though the contrast created between Robeson’s figure and the background was a purposeful move to critique over-simplified, whitewashed American history, but I do not know for sure. Gauging Scott’s specific intentions is an imperfect process, but considering his life’s work, I suspect he would approve of my interpretation.

The ability to refer to Scott’s and Robeson’s oeuvre enabled me to make clear statements about their overall intent regardless of how imperfectly specific works of art or historic moments are understood based on the evidence available.  This blog post was commissioned to respond to our historical moment during a time of widespread racial protest and unrest. It is uncertain whether anything I have to say will stand the test of time or be portentous other than to acknowledge John T. Scott’s work possesses qualities my words do not. He addressed issues in the 1970s that persist in the 2020s.The same can be said of Robeson putting his ideals before his career during Jim Crow; he felt his contemporaries did not go far enough with their activism. To me, my words feel imperfect and my body of work as a curator does not justify my ability to make qualified statements about institutional racism or bigotry of any stripe. That does not bode well for me and others in my profession if those who are supposed to be cultural commentators are lacking in a historical moment.[1] To say otherwise would be my blowing a tinhorn. There is no good ending to this essay, only a call to imperfect activism.

Benjamin M. Hickey is the Curator of Exhibitions at the Hilliard Art Museum on the campus of the University of Louisiana at Lafayette. In the past he held positions at the Masur Museum of Art, OUTSIDE GALLERY, California Museum of Photography, and Albright-Knox Art Gallery.

This error message is only visible to WordPress admins